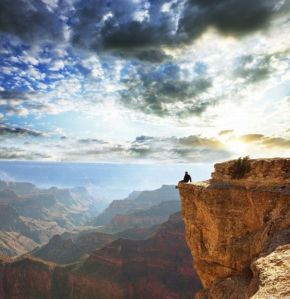 Who is man that God is mindful of him? We are God’s masterpiece creation, created in the image of God – to reflect God; not physically but in the nature of who God is and in spirit because He breathed His Own Spirit into us, thus giving us life.

We are worth more to God than we can possibly comprehend.

If I held a crisp new $100-dollar bill in my hand, you would recognize its value. What if I wadded it up and wrinkled it badly? Is it still worth the same? What if I crumpled it up and threw it on the ground and stepped on it? What if it got dirty and muddy? What if the edges got frayed and a corner got torn off – would it still be worth the same $100? The answer is Yes!

This picture of the $100-dollar bill represents mankind. It’s called our ‘created value’. It’s the same for every person on the planet; no matter what color your skin, where you live, rich or poor, educated or simple. What you do for a living doesn’t matter – whether you are a doctor or a drug addict living homeless on the streets. Everyone’s created value is the same. Your worth to God is the same as anyone else, no matter what!

God sent His Son to redeem mankind from the Fall by dying as a perfect sinless man. Jesus was fully God, but also fully man. He did everything on this earth as a man in complete obedience to the Father, being filled with the Holy Spirit. If He had not been perfectly sinless in all of His ways – He would have been disqualified as our eternal savior and all of mankind would have been lost forever – there was no plan B. This is why He is to be praised and worshipped – because He overcame death, hell and the grave for us.

Do you think the Father loves the Son more than us, who have called upon the name of Jesus to receive salvation? Anyone who receives Jesus as his Lord is now a new creation in Christ. We are now hidden in Christ. The believer and Jesus have become ONE Spirit. When God looks at us, He doesn’t see the old us – He sees us as complete in Christ. He literally sees Jesus because we are now in Him and one with Him. What does that do to our perceived created value now? Doesn’t this mean that the Father loves us JUST AS MUCH as He loves Jesus? Do we love any of our children any less than the other? If you had to choose which of your children to kill, which one would you chose? We love them all the same.

God said that all men are created equal – I believe this includes equal value. If you can understand anything in this life – understand how valuable you are to God and how much He loves you personally! He sent His Son to a planet of His very own (now lost orphans), who desperately want to know their Father. The conduit to this reality is faith. We must believe to receive this reality. Just because you don’t believe in something doesn’t mean it’s not real – it’s just not real to you.

Reach forth in Faith, accepting Jesus as your Lord and realize all God has for you as His very own child. I can promise you will never be disappointed! Your eternal life is at stake.

Author: Commune In The Garden

I was radically saved in the darkest point of my life as a young adult. I've been a lover and disciple of Jesus ever since. I have 3 grown children (1 in heaven) and 4 grandchildren. I am so thankful for everything the Lord has brought me through and done in my life. My desire to write has been with me since childhood. Besides writing, my desire is to teach and encourage the Body of Christ "till we all come to the unity of the faith and of the knowledge of the Son of God, to a perfect man to the measure of the stature of the fullness of Christ;" Eph.4:13. View all posts by Commune In The Garden

Staying in His presence